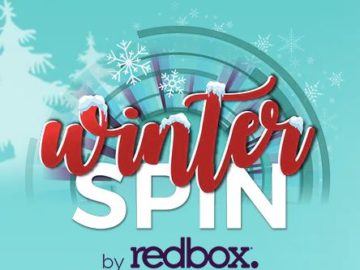 
Enter to win a trip for 4 to the Nickelodeon Hotels & Resorts in Punta Cana!

Runner up prizes include a home entertainment package, a gift card bundle, or a trip to the Redbox Bowl!

To enter, join Redbox Perks (its free) and then complete actions.  Some entry actions are free while others require Redbox rentals.  Starting on December 1, use this free code WINTERSPIN18

Enter Here
Next Sweep »
Entry Frequency:
There is a limit of twelve (12) instant win game plays and twelve (12) sweepstakes entries during the promotion period
Eligibility:
Open to residents of The United States & DC, who are 18 years of age or older and a member of Redbox Perks program.
Start Date:
November 12, 2018
End Date:
December 16, 2018
Official Rules:
View Rules
Prizes:

Grand prize includes a trip for four (4) to Nickelodeon Resort in Punta Cana, Dominican Republic, including airfare and hotel.

First prize is a trip for two to the Redbox Bowl in Santa Clara, California, including airfare and hotel.

You Are Here:
Home » Trip Sweepstakes » This Sweep