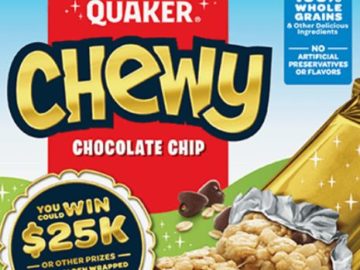 Plus, 300 will instantly win prizes like an Apple iPad, Nintendo Switch, Bluetooth headphones, speakers, or more!

Enter by purchasing specially marked boxes of Quaker granola bars and looking inside for a bar with a golden wrapper.

You can also enter for free by mailing in.

Enter Here
Next Sweep »
Entry Frequency:
Not listed in Rules
Eligibility:
Open only to legal residents of the 50 United States and District of Columbia who are 18 years of age or older. (age 19 in Alabama and Nebraska, age 21 in Mississippi)
Start Date:
April 1, 2020
End Date:
August 31, 2020
Official Rules:
View Rules
Prizes:

You Are Here:
Home » Cash Sweepstakes » This Sweep