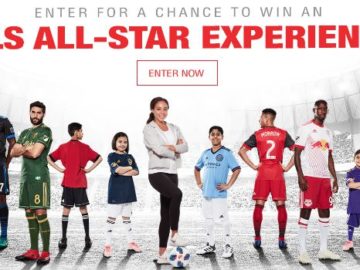 
Enter to win a trip to the MLS All-Star Game on August 1st in Atlanta, GA!

Enter Here
Next Sweep »
Entry Frequency:
Daily Entry
Eligibility:
Sweepstakes is open only to: (a) legal residents of the forty-eight (48) contiguous United States (including the District of Columbia), (b) who are at least eighteen (18) years old or age of majority in his/her state of residency, whichever is older at the time of entry and (c) who are HEALTHY ESSENTIALS® members.
Start Date:
April 1, 2018
End Date:
May 31, 2018
Official Rules:
View Rules
Prizes:

A. Grand Prize (1): The “Grand Prize” is a trip for a family of four (4) people – Grand Prize winner and three (3) guests of his/her choosing (collectively, the “Group”) – to attend the Major League Soccer All-Star Game scheduled for August 1, 2018 in Atlanta, Georgia.  The Grand Prize includes:  round-trip coach class air fare for the Group between a major commercial airport close to the Grand Prize winner’s residence (as determined by Sponsor in its sole discretion) and Atlanta, Georgia, two (2) nights standard hotel accommodations (two rooms, double occupancy each) at an Atlanta-area hotel selected by Sponsor, four (4) tickets to the Major League Soccer All-Star Game scheduled to occur on August 1, 2018 at Mercedes Benz Stadium (exact seat locations to be determined by Sponsor in its sole discretion), round-trip ground transportation for the Group between the Grand Prize winner’s residence and local airport, the Atlanta airport and hotel, and the hotel and Mercedes Benz Stadium, four (4) All-Star Game jerseys (style and sizes determined by Sponsor in its sole discretion), and per diem ($50 per person per day) awarded in the form of a pre-paid gift card (up to a $600 total value). The Grand Prize winner must be able to depart for Atlanta on July 31, 2018 and return home on August 2, 2018.  The ARV of the Grand Prize is $7,060.

B. First Prizes (10): Each “First Prize” is four (4) tickets – for first prize winner and three (3) guests of his/her choosing – to attend a  regular season Major League Soccer match. Match location will be determined based on the location of the winner. The First Prize consists only of the tickets to the match. Transportation, meals, parking, and all other costs not specified herein are the responsibility of each First Prize winner. Exact seat locations determined by Sponsor in its sole discretion. The ARV of each First Prize is $400. There will be ten (10) First Prizes available in the Sweepstakes.

C. Second Prizes (25): Each “Second Prize” is a Major League Soccer Official Match Ball. The ARV of each Second Prize is $165. There will be twenty-five (25) Second Prizes available in the Sweepstakes.

You Are Here:
Home » Tickets Sweepstakes » This Sweep