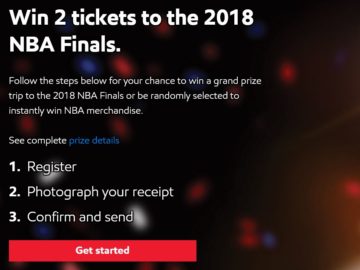 
Enter for your chance to win a 3-day/2-night trip to the NBA Finals! Trip includes roundtrip airfare for two, hotel accommodations, and a NBA Finals Experience!

To play without a purchase, people with the Speedpass+ app on their phone must send an email to speedpassfillup@apfco.com and people without the app should send an email to fillupsweepstakes@apfco.com.  Once you send the email, you’ll be emailed back a link to the free entry form.

Enter Here
Next Sweep »
Entry Frequency:
Daily Entry
Eligibility:
Open to all legal residents of the United States and the District of Columbia who have reached the age of majority in his or her state, or territory of residence and are at least 18 years of age or older.
Start Date:
March 1, 2018
End Date:
April 30, 2018
Official Rules:
View Rules
Prizes:

Five (5) Sweepstakes Grand Prize Winners will each receive a NBA Finals Experience for two (2) prize package consisting of a 3-day/2-night trip for winner and one (1) guest to one of the the cities hosting the NBA Finals (the city is unknown at the time the Official Rules were created) between Thursday, May 31, 2018 and Sunday, June 17, 2018 for NBA Finals 2018 (exact dates to be determined by Sponsor). Trip includes (a) round-trip coach air transportation from a major U.S. gateway airport nearest winner’s residence (as determined by Sponsor) to NBA Finals location for winner and one (1) guest, (b) two (2) nights hotel accommodations (one (1) standard room, double occupancy) (room rate and room tax only), (c) two (2) tickets to Sponsor-determined NBA Finals game, and (d) $500 spending money awarded in the form of a gift card for the winner only. Approximate Retail Value (“ARV”): $5,000.

You Are Here:
Home » Instant Win » This Sweep