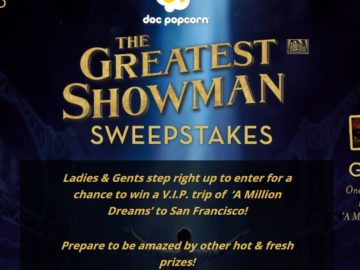 
Enter to win a 3-night trip to San Francisco, CA for a VIP night out experience at a Vaudeville Theater! Trip includes roundtrip airfare for two, hotel accommodations, and much more!

Enter Here
Next Sweep »
Entry Frequency:
Daily Entry
Eligibility:
Open only to individuals who, at the time of entry, are at least sixteen (16) years old and are legal residents of one of the fifty (50) United States (including the District of Columbia).
Start Date:
March 20, 2018
End Date:
April 27, 2018
Official Rules:
View Rules
Prizes:

ONE (1) GRAND PRIZE is available consisting of a trip for Grand Prize Winner and one (1) guest which includes only the following:

ROUNDTRIP AIRFARE: roundtrip, coach-class air transportation for Grand Prize Winner and up to one (1) guest from a United States gateway airport closest to the Grand Prize Winner’s home (as determined by Sponsor or the person/entity arranging travel for Sponsor in its sole discretion) to San Francisco, California.

HOTEL: Three (3) nights hotel accommodations in one room of a hotel of Sponsor’s (or the person/entity arranging travel for Sponsor’s) choosing.

VIP NIGHT AT SAN FRANCISCO’S BEST VAUDEVILLE THEATER (“VIP NIGHT OUT”): A VIP night out experience at a Vaudeville theater in San Francisco of Sponsor’s (or the person/entity arranging travel for Sponsor’s) choosing for Grand Prize Winner and up to 1 guest consisting only of:

o   Double stack of casino chips (for entertainment purposes only and not for gambling); and

o   Transportation to and from hotel.

ONE (1) FIRST PRIZE is available and consists only of: (i) one certificate redeemable for up to twelve (12) Doc Popcorn home delivery shipments, each consisting of one (1) big tin (approximately 3.5 gallons) of Doc Popcorn product which shall be mailed to the address provided by the Prize Winner in his/her entry or in response to the Prize notification, said certificate expiring May 31, 2018; and (ii) free ground shipping of home delivery shipments redeemed pursuant to certificate.   Total First Prize ARV: $620.00.

NINE (9) RUNNER UP PRIZES are available, each consisting only of: (i) one (1) copy of “The Greatest Showman” DVD + Blu-ray combo pack; (ii) a big tin of Doc Popcorn product; and (iii) free ground shipping of home delivery shipment of each of the foregoing to the address provided by the Prize Winner in his/her entry or in response to the Prize notification.  Total ARV of all Runner Up Prizes: $700.00.

You Are Here:
Home » Special Event Sweepstakes » This Sweep