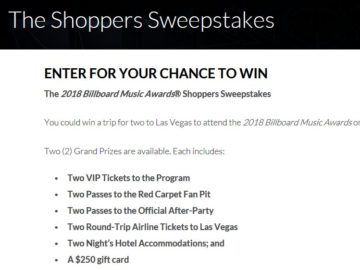 A pop up may appear when you visit the entry page, just close it to reveal the entry form.

Enter Here
Next Sweep »
Entry Frequency:
Single Entry
Eligibility:
Open only to legal permanent residents of the fifty (50) United States of America and District of Columbia (excluding residents of Puerto Rico and other U.S. territories and possessions) who (i) are at least twenty-one (21) years old.
Start Date:
April 8, 2018
End Date:
May 6, 2018
Official Rules:
View Rules
Prizes:

Two (1) grand prizes will be awarded in the Sweepstakes (“Grand Prize(s)”). Each Grand Prize includes the following elements:

• Two (2) passes or credentials providing access to the Red Carpet Fan Pit prior to the Program;

• Two (2) passes or credentials to the official after-party hosted by or on behalf of Producer immediately following the Program;

• Two (2) nights’ accommodations (standard room, double occupancy) at a hotel in Las Vegas, NV, to be selected by Producer in its sole discretion (room and tax only); and

• $250 travel or expense money, awarded as a gift card (subject to terms and conditions thereon) or as a check in Sponsor’s sole discretion.

You Are Here:
Home » Music Sweepstakes » This Sweep